By EP Admin - May 29, 2010
(Editor's Note : - this BBC story was initially published in  5 April 2006; but not much has changed for trafficked women in India since......)
Anwari Khatoon came visiting a relative in the northern Indian state of Haryana eight months ago, but ended up getting married against her will to a local man with six children from a previous marriage.
A man from her village in eastern Jharkhand state had accompanied the 22-year-old woman on her journey to Haryana.
When she arrived in the village, Anwari found the man and her relative pressuring her to marry the man with six children, a middle-aged truck driver.
Her new husband paid 10,000 rupees ($220) to the man who brought her to the village.
"Can a young, single girl get married to a father of six willingly?" asks Anwari.
"It is all fate. What has happened has happened. What can I do? My parents didn't even get any money from this deal."
Anwari is among the several thousand young women from all over India who are literally sold-off to men in Haryana, a state notorious for its low ratio of girls to boys.
The going rate for buying a girl in the state is anything between 4,000 and 30,000 rupees ($88 to $660).
Sex slaves
A cultural preference for sons over daughters has skewed India's sex ratio in places like Haryana.
As a result of female foeticide, there are about 861 women for every 1,000 men in Haryana, according to the last census. The national average is 927 women to 1,000 men.
Since there aren't enough local women to marry, Haryana's men pay touts to bring women for them to marry and to work on their farms.

Social activists reckon most of these women end up being used as sex slaves and then resold to other men in what looks like a flourishing market in trafficking of women.
The head of Asawati village told us about a girl called Ajmeri who arrived last month from the state of West Bengal in eastern India. She told the village head that "some people had come to see me and offered 10,000 rupees ($220)".
We went to look for Ajmeri. But when we reached her home she wasn't there. Her neighbours told us that she "may have been taken away by somebody" to another village.

Vicious cycle
These young women who are sold off as brides against their will are known in Haryana as 'paros'.
According to one estimate, there are almost 45,000 paros here from the dirt-poor, eastern tribal state of Jharkhand alone.
Touts pay their poor parents anything between 500 to 1,000 rupees (about $11 to $22) to take the daughter. 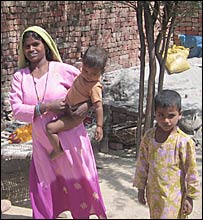 There are 45,000 'paros' from Jharkhand alone
Social activists say Haryana exemplifies the vicious cycle of exploitation of women and represents a society which does not respect women.
Haryana minister Randeep Singh Surjewala says the government is aware of the problem.
"Whenever we get complaints we take action. We are also trying to educate people socially and address the sex ratio problem," he says.
Last month a doctor and his assistant in Haryana were sentenced to two years in jail for revealing the sex of a female foetus and then agreeing to abort it. It was the first time offenders had been sent to jail for this offence.
Shakti Vahini is one NGO trying to help the paros by rescuing them and sending them to a safe home run by the state government.
In one case a man stands accused of beheading his paros wife because she refused to sleep with his brothers.
"There is a lack of political will, so no government is taking any steps to curb this problem," says Sanjay Mishra, who runs a voluntary group in Jharkhand associated with rescuing these women.
Meanwhile, Haryana's infamous market in women continues to flourish.
bride buying bride trafficking in haryana bride trafficking in india Haryana. news